The project in its origin is about playing ensemble music in a room with no center. It’s about the gong as an instrument that creates structure and melody[1]. And about exhibition principles of visual art applied to acoustical art. Now I’d say it’s mainly about a new instrument and it’s possibilities.

The new instrument is made of fifty individual wind gongs from Wuhan, China, where gongs are being manufactured for thousands of years, actually. They will be installed in a special order that divides the room into a labyrinth-like structure. These gongs resonate even to mere sound. In an old chinese legend some monks were able to sing at the gongs and thus make them vibrate and sound like a barking dragon. But it’s a fact that instruments are being echoed with their exact timbre in those 50 hanging bronze cymbals.

Each gong has its dominant frequency. So the material for the composition will be developped in a first step by analyzing the selected gongs that i will be delivered from the world’s oldest gong manufacture in Wuhan. The composition will play with a reciproque influence: the ensemble will play material that is derived from the natural pitches of the selection of gongs i use for the installation. On the other hand they will play around those frequencies that best resonate in the hanging gongs. The garden of gongs will react to the ensemble by itself, as a very precise and magical echo, but the gongs will also be played directly, in a more or less classical manner, with soft and hard mallets, with bows and other materials. Because of their broad bandwith of frequencies a lot of harmonic beats can be created by playing several gongs at the same time.

The ensemble is spread across the room, communicating by listening. The audience will change positions in the labyrinth during the concert and decide about the acoustical perspective of the concert individually.

I first dealt with the topic of the room without center in the dance piece „Jerusalem Syndrom“ in 2003. Later I expanded the theme in my concert „Babylonian Loop“ for the spinning restaurant in the Berlin TV tower, produced by Berliner Festspiele, Maerzmusik 2007. Twenty musicians were placed around the „bagel-shaped“ room, as one critique called it, 207 meters above Berlin. The audience sitting at the tables would slowly pass the musicians individually. The concert, greatly performed by the KNM, takes 60 minutes, which equals two rounds of 360° by the audience.

[1] The practice of combining small gongs according to their pitches for music playing began way back in ancient China. For instance, Chinese gong chimes images were featured in paintings from the Song Dynasty. In the Yuan Dynasty, Chinese gong chimes were not only popular among ordinary people, but also used in banquet music in the imperial court and religious music. There appeared 10, 13 and 14-note gong chimes. 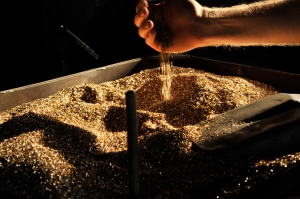 copper swarf in a manufacture for cymbals

This entry was posted in 3. Recent. Bookmark the permalink.